Showing posts with the label Akshay Khanna
Show All 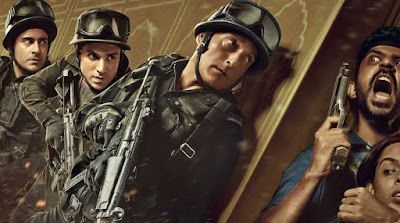 Almost two decades back, 2 terrorists from Pakistan descended inside the world famous “Akshardham Temple” at Ahmedabad in Gujarat on 25 Sep. 2002 and massacred 30 people apart from injuring over 80 of them. They held the devotees hostage within the temple precincts overnight while also killing many of them one after the other until a terrost in India’s captivity was released in to Pakistan border. That these events unfolded in full public view and occurred right after the 2002 Gujarat riots left a deep scar in the development model the State claimed. Much has been spoken, written, debated on the media as well as the subject getting international attention. But a film on this topic is one of the first titled “State of Siege – Temple Attack”, a Zee5 Original that released on the OTT platform on 9 July ‘21.   Written by Willian Borthwick and Simon Fantauzzo, the film has been Directed by Ken Ghosh and Produced by Rohini Singh and Abhimanyu Singh and features a long list of actors led by A
Post a Comment
Read more
More posts