Showing posts with the label Inox Movies
Show All 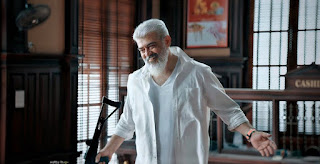 Bank heists are a common subject when it comes to international films. Many are based on true stories, some are really well made. Over two decades back, Amitabh Bachchan’s Aankhen was all praise for it’s content and crew’s excellent acting. Thunivu is perhaps the first of its kind in its genre in Tamil cinema. After a bit of it in Billa and Mankatha, Ajith Kumar is back in his badass avatar. Spanning 145 mins, the film sets the ball rolling within the first 15 mins.  Darkdevil aka Chief (Ajith Kumar) and his smart crew are a gang of robbers with various international heists to their credit. They are much sought after, with their impeccable track record, access to the latest technology, weapons and what not. Kanmani (Manju Warrier), Amir, Pavni and Ciby are part of the gang as well.  It is interesting that the protagonist doesn’t have a defined first name all through the film! Yes, Ajith is addressed with various monikers and not really an actual name. At the end of the movie, we see Y
Post a Comment
Read more
More posts