Showing posts with the label kasi theatre
Show All 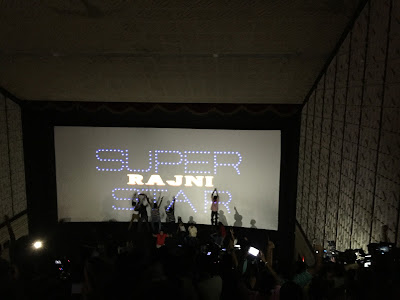 This was one occasion that I have been eagerly looking forward for the past one year or so - To watch FDFS of Thalaivar movie. And it happened. Had the darshan of Thalaivar Superstar Rajnikanth in and as Kabali at 4.10am on Friday, 22 July 2016 at Kasi Theatre Chennai.  Watch my film review to The Hindu at 2.26 in this video  which was taken outside Kasi Theatre on Friday morning. I have seen the film thrice back to back on Fri/Sat/Sun and now content to my heart about the movie, fully satisfied as a fan that Thalaivar has not given us just a movie but something very special.  At 65, him acting and taking so many risks itself is a great deal. And he has given us such a splendid performance. Many fans cried along with him in the scene where he reunites with his wife. Fans celebrated fatherhood when Dhansika calls him "Appa" in a particular scene. You may note that Thalaivar has never had a son in any of his movies, just like his real life, in which he has
Post a Comment
Read more
More posts