Showing posts with the label thala ajith
Show All 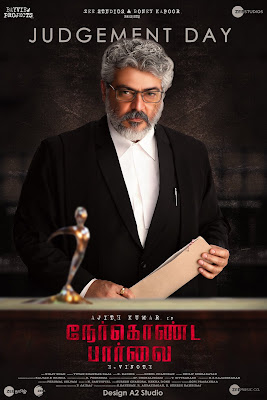 The last time I remember seeing Actor Ajith Kumar in such a heated courtroom conversation was in the film Citizen. Released in 2001, when Ajith was about 20 years younger, Ajith spoke at length so many memorable dialogues during the fag end of the film for over 10 minutes which went on to become a rage in the coming years for his fans and critics alike.  After that, I have seen Ajith in various roles – romantic on one hand, a stiff cop on the other, a local rowdy, an international arms dealer cum smuggler, a doting father recently, a loving husband, village chieftain and so on. But when I heard that Pink would be remade in Tamil and Ajith would helm the role of Big B (in the original), I wasn’t ready. Honestly. And I have been a big fan of Ajith for over 25 years, perhaps from the days of Ullasam where I really liked his role as a college goer turned truant but with a soft heart. I wasn’t sure if Ajith can carry forward the impeccable legacy left behind by the AB in the original.
3 comments
Read more

This is the fourth time Actor Ajith Kumar and Director Siva come together for Viswasam - in Tamil, Viswasam means loyalty. We celebrate their loyalty to each other too with this film. In all their past outings, it’s the protagonist safeguarding his loved ones - In Veeram, it’s his fiancee's family; in Vedalam it’s his stepsister, in Vivegam, it’s his pregnant wife and in Viswasam, it’s his daughter. What I appreciate the most of Siva is his portrayal of Ajith in each outing. He knows the actor’s strengths at the back of his head and pins the screenplay accordingly. But for Vivegam which was more a hollywood-type attempt with too much of foreign locales, Russian mafia and gun fights which Ajith’s hardcore fans couldn’t relate to, all the other films did reasonably well during their release. Viswasam has had a fantastic opening in B & C Centres, thanks to a meticulously planned Pongal release which was announced six months back by Director Siva and Sathyajothi Films.
1 comment
Read more
More posts