Showing posts with the label AK vs AK
Show All 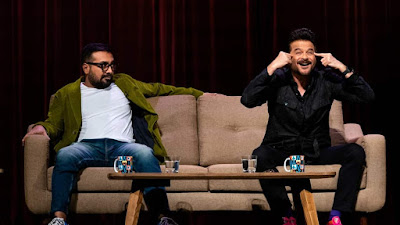 Well, I decided to call it “Nayak” myself as the film is all about the Nayak and his Khalnayak. Or the other way around. So it sounded all the way from frame 1 till the climax with a twist. With the way the film ended, I won’t be surprised if the makers end up making a sequel to the movie. Rather, a prequel, up to where Anurag Kashyap and Anil Kapoor argue on a stage where Anurag teases Anil to the hilt and their admonishment of each other not just amuses the live audience, rather shocks them with the turn of things in the first few mins of the film rolling on.  AK vs. AK is supposedly a “real-life movie” starring Director Anurag Kashyap and Bollywood Superstar Anil Kapoor as themselves. Apparently, there’s a former rivalry between the two and things take an ugly turn with Anurag kidnapping none other than Sonam Kapoor who appears as herself in the “movie”. He sets a deadline unto sunrise next morning by when the actor has to search for his daughter all across Mumbai city and it’s subu
Post a Comment
Read more
More posts