Showing posts with the label Rashmika
Show All 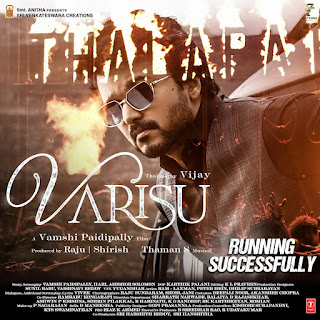 After almost a week of its release, watched Vijay’s Varisu. Went without any expectations as there has been a steady negative feedback about the film. In fact, the reviews mostly said the film was too much drama.   After coping for over 150mins, I am convinced with the popular verdict. The film is heavy on drama. But then, aren’t films meant to be that way? Will come back to this at the end of this article.  Vijay (Vijay) is sent out of his home by his father Rajendran (Sarath Kumar) as he fails to fall in line to his wishes. The family patriarch, father of three sons is yet to decide his successor of his sprawling business empire which is dominated by the mining fields and wants his sons Ajay (Shamsudern aka Sham) and Jay (Srikanth) to pitch themselves against each other. Not wanting to be a part of this rat race, Vijay relinquishes from the race. He travels around the country only to be called back home by his mother Sudha (Jayasudha).  On the occasion of Rajendran’s 60th birthday ce
Post a Comment
Read more
More posts