- December 06, 2015
I have seen Ajith grow from a boy next door in films like Pavithra and Ullasam to a mature actor in films such as Vaali and Godfather to majestic successes such as Veeram and Aarambam. That the Billa series gave him an undisputed position in the top 3 among next-gen actors of Tamil Cinema is no surprise. What I like about Ajith is that he chooses purely commercial, tried and tested formulas and has been on a winning streak for a long time now. While he experiments with his looks like Kamal Hassan, he sticks to his "Thala" image and larger than life persona created by his ardent fans, many of whom happen to be Superstar Rajnikanth's fans as well. He is also a simple man, as admonished by many people within the industry and outside. There was a video clip of him visiting Tirumala Tirupati temple with just two people around, right before his latest film Vedalam's release. It showed his simplicity and reach among the common people, who were taken by surprise.

So, I get to watch Vedalam after almost a month after its release. I saw the movie at INOX multiplex at Citi Centre, which had about 120 seats, of which 80% were occupied on a rainy Sunday. People were waiting for some entertainment in these gloomy days in Chennai which has been lashed by unprecedented rains since the past week and largely, for over a month. I was surprised that the film was still running three shows and there were people to watch the film at a theatre after four weeks of its release. Piracy has gone up significantly, but the film is still hot and attracts movie goers sends a strong signal of what the film is all about. The crowd was mostly family audience. 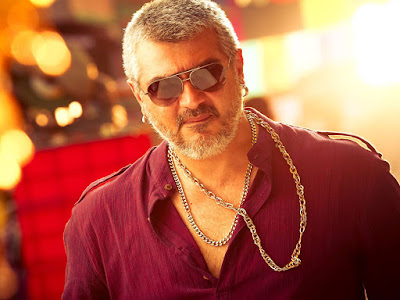 I have seen all films of Ajith and I am big fan of his. I am also a big fan of Director Siva who comes together with Ajith for the second time in Vedalam after their 2014 super hit Veeram which was a rural subject and had a lot of greenery and scenery packed (Switzerland included for a song!). A few minutes into the movie and I kind of knew how the Director would take the film forward with the script. Having been an ardent fan of "masala" cinema, I have a knack of understanding the plot. (pun intended). The first reaction after seeing the lead character Ganesh (Ajith) and his sister Tamizh (Lakshmi Menon) was the same reaction I had in the 1995 super hit Baasha. This was further validated in the climax scene where Ajith emerges with the handle of a water pump a la Manickam (in Baasha). It kind of sums up. I personally feel Vedalam would be Ajith's Baasha, perhaps a milestone that the Ajith has set for himself.

The script and screenplay (penned by the Director) is strong and racy. Out of the running 156 minutes, I would probably say there are not more than 12-15 minutes of drab all through the movie. I was sitting at the edge of my seat during some scenes (sic) when I knew the good would somehow destroy the bad. Shruti Hassan who pairs Ajith has lesser screen space than Lakshmi Menon in terms of number of minutes! This, is a master stroke by the Director since the title (and the story) of the film revolves around the hero. The plot is simple, of relationships and revenge. The hero destroys the baddies just because of the love poured on him by complete strangers is yet another first in Tamil (masala) Cinema. I liked Ajith as Ganesh more than the Ajith as Vedalam (that part of the film that kind of slows down, when the Director probably was trying to fill space). I also saw similarities of Ajith dual-acting in some scenes which reminded me of his earlier outing, Villain. 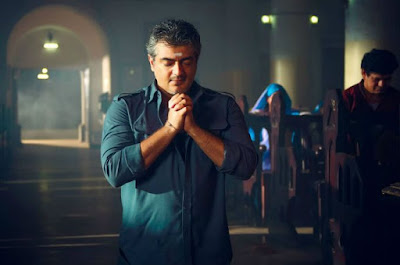 Another curious part of the film was the Ganesh festival celebrated with fervour in Kolkata - I thought that was somehow a misfit, while the lyrics of the opening song on Vinayaka was more message oriented for die-hard Ajith fans. I liked the scene where Ajith confesses that he is not present on Facebook, Twitter and Whatsapp - as a character in the film, but even in real life, he is a private guy. Arjun, Suri, Kovai Sarala, Thambi Ramaiah, Mottai Rajendran and Mayilsamy provide good supporting cast albeit the entire weight of the film is carried single handedly by Ajith Kumar. Rahul Dev once again plays a role that he seems to be getting better in Tamil Cinema, that of a antagonist ably supported by Avinash, Aniket Chauhan and Kabir Duhan Singh.

The highlight of the film is Anirudh's powerful BGM and two foot-tapping numbers. Aaluma Doluma, a typical thara local song penned by Rokesh and sung by Anirudh himself, will remain etched in the minds of Anirudh and Ajith's fans for a long time to come. Ajith, who doesn't put himself in to too much pressure on duets and dance has played well for this quirky song along with Veera Vinayaka, which is probably going to be played on the festival of Ganesh Chaturthi every year. This is his second tribute to the Elephant God after a similar opening title song in Aarambam (2012).