- April 04, 2016
My wife is currently out of town and I had to find a way to keep my two little kids engaged on a Sunday. Checked out my library and found the movie Pasanga 2, which we all wanted to watch for a very long time. The movie revolves around two little kids, who parents are busy workaholics. Te two kids include a boy and a girl who study in different schools but have one thing in common - they are a menace at school and their parents have to change their school every year for the past 4 years. Their tantrums at home are so much that the same gets reflected in their schools as well. The parents take them to different doctors including Paediatricians and Psychologists and the unanimous response is they are ADHD affected.

Attention-deficit/hyperactivity disorder (ADHD) is a brain disorder marked by an ongoing pattern of inattention and/or hyperactivity-impulsivity that interferes with functioning or development. 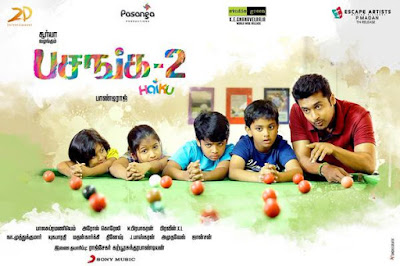 The two families move to a new apartment where the kids befriend each other. They commit a lot of mischief within the apartment and this prompts the Apartment Association to call for a meeting among all parents to discuss this. The two parents finally decide to send the two kids to a Hostel School and at this stage, my girls got too emotional. While my elder one who understood the film quite well wept not to be sent to a hostel, the younger one loosely understood the scenario and wept as well. With wife not being around and me alone with the kids, I too got all emotional.

Another resident of the apartment advised them to visit him and introduces himself as a Clinical Psychiatrist although the parents don't heed to his request. After a few difficult days at the hostel, the kids create a ruckus at the hostel as well, scaring away the other kids and the Management decided to inform the two parents to remove their wards off the school. They return back to the Apartment and the same day find solace in the house of the Psychiatrist and his wife who is also a teacher at school which takes care of kids with such a disorder. The doctor once again requests the parents to meet him which they finally do. The kids join the special school and come out with their best.

While the movie is very enriching, it is also a great learning for young parents like me, who are juggling between employment and child-raising. With someone like me who is a budding Entrepreneur, things are even more difficult. But my takeaway from the film is that parents should spend time with kids rather spend money on them. Age old saying, but quite true.

The two kids, played by Baby Vaishnavi and Master Nishesh have given a splendid performance. Other cast includes Suriya (Doctor), Amala Paul (Teacher), Karthik Kumar, Bindu Madhavi, Vidya Pradeep and Ramdoss, among others. Director Pandiraj has a gripping screenplay but hasn't utilised Surya's potential. This could have been Suriya's TZP moment, but somewhat misses the zeal.

Music is by Arrol Correli. Tunes are catchy but do no remain in memory.