- January 14, 2017
Managed to watch Bairavaa first show at Inox Mylapore. It was a full house with a majority of Actor Vijay's fans thronging from early morning to catch a glimpse of him. This was a much awaited release ahead of the more anticipated Surya's S3. Pongal releases have always been box office hits and Bairavaa is no exception. By the way, there are two heroes in the film - Actor Vijay and Music Director Santhosh Narayanan. First about Vijay. 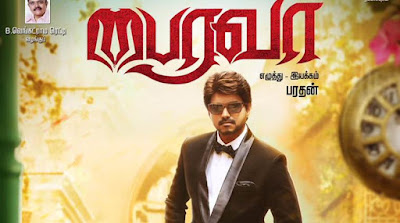 The film is an out and out mass masala with the actor clearly managing to stay ahead of his ardent fans expectations. Bairavaa is a collection agent who helps Banks collect loan dues. The opening act is one such with a mass fight sequence which brings applause right from the first row to the last followed by a top-rated song which talks about the ills of hoarding cash with heroic lyrics. Vijay positions himself as a do-gooder and is always the go to guy whenever something goes amiss. He meets his love interest in a wedding and an event there turns about to be the main plot of the film. The film travels in flashback for about 20 minutes without Vijay in the frame. Turns out that the plot is about how an Medical College manages to con students with admission without proper facilities which includes the murder of a student and how the hero joins the heroine in her fight against the Founder of the College who has humble beginnings. Jagapathi Babu as the key villain does justice to his role while Daniel Balaji once again fails to impress but for his stress on words in his dialogues. 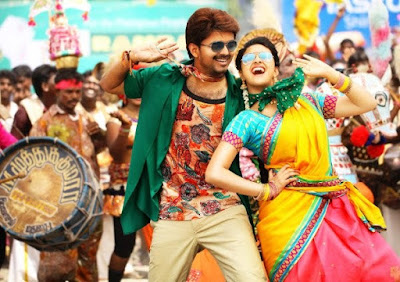 The screenplay is racy although very guessable akin to previous films of Vijay and other mass heroes. Vijay is ageing and that's seen clearly especially when he attempts punch dialogues and close-ups. His wig is terrible and I wonder why the actor agreed to such a "novel" idea. Keerthy Suresh plays the role with elan and is a pleasure to see her perform effortlessly even in a few over the top emotional scenes. Supporting actors and crew make watching the film a breeze. Thambi Ramiah is wasted completely without any scope for acting or comedy. The film, at least in the show we saw ran for over 165 mins, a tad too long. Was good to see references to the PM look alike, clearly a mastermind political positioning by the Director to project Vijay as a mass hero with a succinct political message.

Santhosh Narayanan. What do I say about this guy. He seem to be moving the bar upwards with every film of his, with back to back hits right from Kabali, Kodi, Kashmora and now Bairavaa. With this, he has composed music for most of the top stars in Kollywood and is in the big league now. The songs have been peppy with his own style of music making and the rerecording/BGM is top class. A lot of inspiration taken from Hollywood but Illayaraja and AR Rahman have also been influenced, needless to say. The songs have been chart busters already with the opening and closing mass songs trending worldwide.

Bairavaa is a good attempt to reclaim his position - a Mass Vijay Film. Go watch in theatres. If your kids are used to medium level violence in films, then do take them along. Good time pass.
bairavaa Cinema film keerthy suresh mass Music santhosh narayanan Tamil Vijay