This is the fourth time Actor Ajith Kumar and Director Siva come together for Viswasam - in Tamil, Viswasam means loyalty. We celebrate their loyalty to each other too with this film. In all their past outings, it’s the protagonist safeguarding his loved ones - In Veeram, it’s his fiancee's family; in Vedalam it’s his stepsister, in Vivegam, it’s his pregnant wife and in Viswasam, it’s his daughter. What I appreciate the most of Siva is his portrayal of Ajith in each outing. He knows the actor’s strengths at the back of his head and pins the screenplay accordingly. But for Vivegam which was more a hollywood-type attempt with too much of foreign locales, Russian mafia and gun fights which Ajith’s hardcore fans couldn’t relate to, all the other films did reasonably well during their release. Viswasam has had a fantastic opening in B & C Centres, thanks to a meticulously planned Pongal release which was announced six months back by Director Siva and Sathyajothi Films. 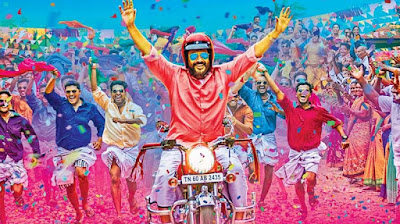 Viswasam, is a tribute to fatherhood. The film opens in Theni district with Thooku Durai (Ajith) requesting the District Collector to allow the villagers to perform the annual temple festival which hasn’t occurred for a decade (Siva doesn’t reveal why, though!). The film slowly revolves to his flashback which has Nayanthara play his muse as a Doctor only to get married too soon and also have a baby girl. Thanks to a turn of events, the couple split, at the insistence of the wife who swears that he never visit her in future. The Hero yet makes a visit to Mumbai to meet her after a decade, at the insistence of the family’s elders and encounters various turns of events which eventually reunites him with his beloved wife and daughter. The Daddy-Daughter chemistry is much stronger than that of the hero-heroine. All is well, that ends well and the Director has a message during the rolling credits to parents - “Keep your dreams to yourselves and don’t thrust them upon your kids!”. Well said Siva and thanks for reinstating it once again. 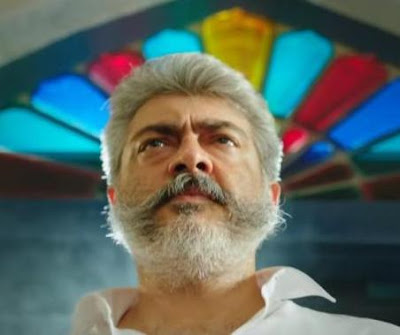 A large supporting cast including Thambi Ramiah, Robo Shankar and a slew of others who play Ajith's extended family have small yet meaningful roles. OAK Sundar as a small time villain is an apology to his illustrious legacy while Jagapati Babu should stick to wearing colourful coats and swear words in Telugu films. Sorry. A surprise inclusion - yesteryear Comedian Vivekh & Kovai Sarala are sore points in the film, sadly with Ajith delivering a lot more comedy punches than the other two put together. Music Director Imman knows exactly what Ajith’s fans and fanatics love and has delivered. Two foot-tapping songs which see Ajith sing and dance like never before with colourful visuals; a romantic number with his lover and a montage number with his daughter sung by Sid Sriram which will move every father who has a daughter (most of us could remember the same duo’s inimitable chemistry in the song “Unakenna Venum Sollu” from Yennai Arindhal). Action sequences which happen every 8 minutes or so on an average (hic!!!) are top-notch with Ajith breaking the muscles of every guy who comes his way. 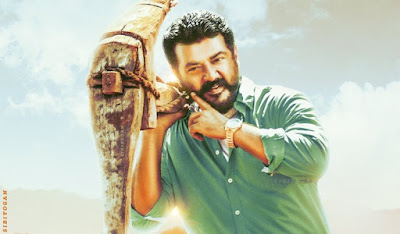 Say what they want, Ajith & Siva have silenced their critics just like how a Master Chef does with his dishes at Star hotels where people who never go there anyway, complain  all the time about high prices of food items! The duo have given a fantastic treat to their fans and with this one, Ajith has shown how much he has evolved and matured as an emotional, strong, character artist, something I am seeing after Mugavari which released 18 years ago!
Ajith Cinema director formula films imaan kollywood Masala Music nayanthara Siva Tamil thala ajith viswasam