- July 19, 2019
I’ve always liked thriller films. And if it’s in Tamil (off late, there have been quite a few), then I give it a shot. And when it’s the second film as a Director for someone after receiving much acclaim for his previous thriller, even more. And if it’s featuring Actor Vikram, I would jump into. And that’s how I ended up watching Kadaram Kondaan today. The first 10 minutes set the film on a good note. And that’s quite important, for that’s where you hook the audience. And the entire film is edgy with slick editing and cinematography, what with yet another fantastic underrated performance by Vikram. The film opens with a cute couple Aatirah and Vasu Rajagopalan (Akshata Hassan and Abi Hassan - Offsprings of Kamal Hassan and Nasser, respectively) get the scan done at a maternity hospital only to be overjoyed seeing the little one in the womb. The couple has just moved to KL, Malaysia and the dialogues represent they have had a love marriage which doesn’t have the blessing of the elders. Meanwhile, KK – no one knows his name all through the film is seen running away from a bunch of guys, cops, thugs and so on. He gets hospitalised where Vasu is as an assistant. His wife is now kidnapped for want of releasing KK. Vasu helps KK escape the hospital which is well guarded by the Cops and the duo are on a cat and mouse chase by the Cops and Baddies alike.

At some point, it gets to a stage beyond curiosity and sound, cinema logic to know why KK is being chased only when the plot is thrown open to the audience. KK is a badass, a former cop, a double agent, an undercover and a serial killer on the run. But he has a reason and a past, like all the guys who are history sheeters. And finally, all’s well that ends well, what with the couple reuniting, the bad cop in the Police Department Vincent getting reprimanded and KK once again on the loose. Phew. 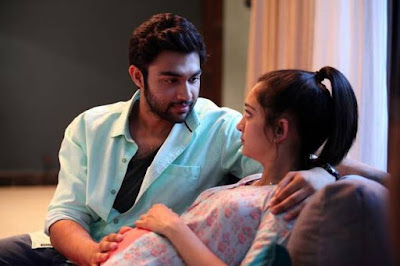 Director Rajesh Selva who has assisted none other than Kamal Hassan in a few movies and helmed his previous outing Thoongavanam , yet another heist thriller, has done a neat job with Kadaram Kondaan. Beautiful picturisation of KL, slick screenplay, action scenes that are well thought out, a car and bike chase and some edge of the seat (hic) moments and almost no family sentiments or otherwise, a very good Hollywood type Thriller, I must say. After all, it’s a remake of the 2010French film “Point Blank”.

The music album had three songs, one eulogising KK (which runs like a montage in the film), a romantic numbered none other than Sid Sriram (one for the charts, perhaps) and a peppy number for the final credits sung by Vikram himself. Music Director Ghibran’s BGM is outstanding and doesn’t disappoint from the word go. Vikram, who turned sixty recently and got his son married off is in fantastic form and can give run for the money of actors half his age or lower, with his muscular physique and macho looks. I have always been in awe with the kind of scripts he chooses, although this one is quite similar to what we saw him in Irumugan, although KK stands out well. Akshara Hassan looks like Kamal’s clone (she is, after all) in many angles and has performed well. Abi Hassan as Vasu has given his due, so have a bunch of newcomers like Cherry Mardia, Lena, Vikas, Nanda Kumar and Jasmine whom we are a seeing for the first time perhaps in Tamil. 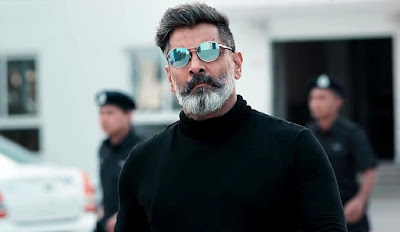 KK will not disappoint if you like the kind of racy scripts, although it’s quite surely going to appeal only in A centres with a quick follow up on Amazon Prime I’m under 5 weeks (like NGK). If you’re not shopping EoSS this weekend, then try KK at a Multiplex near you. The crew wouldn’t disappoint you, even if the Pop Corn and Nachos do. Good weekend.
Abi Hassan Akshara Hassan Cinema ghibran Kadaram Kondan Kamal Hassan Nasser Rajesh Selva Rajkamal Films Tamil Thriller Vikram