- October 25, 2019
Director Atlee and Actor Vijay score a big win with Bigil which was released today amidst quite a fanfare as well as the usual pre-release controversy, thanks to the Actor’s political views during the Audio release event held last month. The film, which was said to be eulogizing womenfolk had a lot of hope and hype, thanks to the two singles – Singapenney and Verithanam scored by AR Rahman and released in a span of three weeks as well as the Trailer which was an instant hit with Vijay’s fans as well as critics.

The film begins with a student agitation where a Minister incites parallel violence through goondas dressed up as Police only to harass and vandalise the students and the college campus. Michael (Vijay) arrives at a compromise and then the usual entry song, dance, fandom moments and a colorful sequence of the much popularized Verithanam song. His beau Angel Aseervatham (Nayanthara) is almost a beau in the film with very little screen presence or a powerful performance that she has become synonymous with and one which is limited to a mere supporting role all through. In the flashback, Rayappan (Vijay Senior) who is Michael’s father and a local goonda shares his story why he took up the sword and advises Bigil (alter ego of Michael) to focus on his favorite sport Football, where the latter wins a lot of prizes and aims to become a national player. In a turn of events, Rayappan is killed by his rival and Michael ends up killing him, only to give up sports and take up goondaism.

Even as the flashback is being narrated, Michael has to take over as the Coach of a local Football Team which is on its way to Delhi to play the National Level Finals and their Coach (Kathir) gets assaulted during a fight between Michael and his rival. The team however doesn’t recognize him beyond a local rowdy only to understand later, his past experience and why he is on to the job. Sharma, the Football Federation Chief (Jackie Shroff) plays the antagonist who’s trying to ensure initially Michael and later his girls don’t make up to the finals. How Michael turns Bigil once again and makes his team win forms the rest of the story. The supporting crew of Vivek, Yogi Babu, Anand Raj, Manobala and a host of others have done their part well while AR Rahman’s songs and background music is outstanding as always. Editing by Ruben and Cinematography by GK Vishnu is neat and without flaws.

Many scenes have been inspired from Shah Rukh's Chak De India and seemingly with the approval of SRK since he also cheered the team on Twitter ahead of its release.

Atlee takes a dig at a Brahmin household for being orthodox and having fundamental beliefs by not allowing the daughter-in law of the house back to the team. They finally agree to send her, only to shun their inhibitions. People like Atlee and Vijay have the guts to mock at Hindu customs in movies, especially those of Brahmins while I wonder if he would have kept the same dialogues that Gayathri’s husband says, how can he allow his wife to wear shorts and play in public if that character was from the religion of peace. We may remember the global outrage created by a section of the society of a particular religion when Sania Mirza used to play Tennis with shorts right after her marriage. Interestingly, the current Under-17 and Under-19 Women’s Football Team doesn’t have a single Muslim girl which Atlee may not be privy too since his motive was not to eulogise women rather only mock at Hindu belief systems. And it’s usual for commies like Atlee to make fun of us, but he doesn’t realize that the same people are much stronger and wiser in their thoughts than he thinks. Quite surprised that AGS agreed to these parts, especially ones which are provocative and that which slams a particular society. Sad. 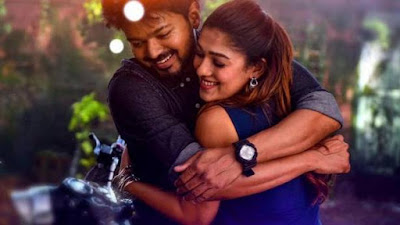 Another character Anita is an acid victim, thanks to her over-enthusiastic lover but comes out strong after her surgery and a self-imposed exile to play the game and help the team win as well. Indraja is the stout kid in the team (daughter of Actor Robo Shanker) and there are a few fun moments with her on and off the field, which is ironical, since the film is about eulogizing women. But Atlee’s real intentions are not that, perhaps and so for the sake of comedy and fun, mocking at the weight and color of women is absolutely fine, since it’s a commercial film after all. Vijay calls her Gundamma in the climax and slams the other girls too in the team with some choicest abuse ahead of the second half of the final game after their poor performance in the first half, only to enthuse them apparently. Well.

In the song Singapenney, AR Rahman and Atlee appear along with Vijay, which reminds us of how Director Shankar used to appear in at least one scene of his films. Producer AGS Entertainment has pumped in Rs. 180 Crore to make the film and have sold the digital rights to Amazon Prime and Satellite rights to Sun TV. The initial reviews have been positive and Vijay seems to have yet another bumper Deepavali as fans throng to theatres with family to watch a film which is all about women’s upliftment although Atlee faults big time at it only to score a self-goal with Bigil – pun intended.
AR Rahman atlee bigil chat de india shah rukh khan Vijay