- May 29, 2020
After donning roles of a Petty Thief, a Police cop, a Teacher, a Radio Jockey and a happy go lucky homemaker, Jyothika Surya stars as a Lawyer in her most recent outing Ponmagal Vandhal and also has a brief dual role of sorts. Directed by debutant JJ Fredrick and produced by Surya’s 2D Entertainment (as he always does for his beloved), PV is essentially not a Court Drama as one would see in the film’s trailer.

Kamal Hassan’s Mahanadhi was a critically acclaimed film in 1994 when it released which was about child sex-abuse, a topic that was not so popularly discussed in public domain then. But due to 100s of cases which have occurred in India over the years and now that this has become a Living room banter across SEC households, the topic gets mainstream visibility and the Crew have chosen a much appreciable subject that could win hearts.

PV is an emotional drama about Child Rape cases and the ordeals one goes through growing up as a victim. The protagonist argues how the rich and mighty get away with these heinous crimes, specifically in India.

The script is intertwined with a number of knots and until the last scene, the Director keeps the suspense element on, which is highly commendable. The narrative is weak inside the Court room but the emotions hold the viewers breath in a few situations, especially at the crime scenes. The Director also includes the case of Honour Killing within the script but this aspect is not amplified as one would expect it to be. Instead, the story moves at it’s own pace over a running time of 2 hours,only to end abruptly that the Antagonist is convicted for abetting a crime that was done 15 years back, something that’s very filmy especially without the much needed evidences on which the Legal System operates. Well, this is a Cinema.

As is always the case, JJ Fredrick like a few other shadow Directors draws loose references against a particular religion and a Political Party while conveniently forgetting the crimes against women and especially on Nuns which have gone unrepresented and quiet. Quite understandable. After all, he is a pawn in the process where vested interests fund the idea of hatred against other religions through poor souls like him. Sad.

Cameraman Ramji has shown Ooty in it’s beauty while Editor Ruben has ensured the film is watchable and not a drag. Music Director Govind Vasantha once again proves why he’s among the best of the younger lot when it comes to scripts like PV.

Producer Surya has made a coup by getting 5 veteran yesteryear Directors to play roles in PV - Bagyaraj, Tyagarajan, Prathap Pothen, Pandiarajan and Parthiban.

Use your discretion should you wish to watch with Children. While sensitising kids on such topics is important, mainstream Cinema need not be the only or perhaps the best way. 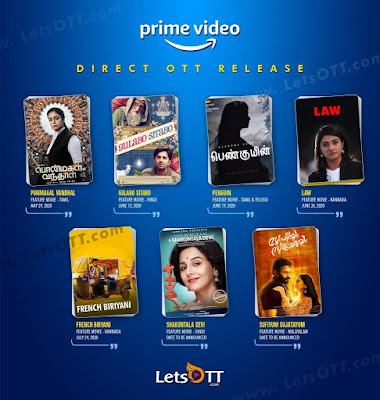 PV becomes the first Tamil movie along with a few others across languages to release on any OTT Platform skipping a Theatrical release and I too became part of History by watching the First Day First Streaming of the movie at 11.55pm on my iPad through the Amazon Prime App. While the experience was anew and different, I wonder if it could be a plausible method to bring to public domain such sensitive subjects. Except that one should undertake home productions and at a meagre cost for Artists. For big budget films, the Multiplexes are the finest fit. For a change, we the audience are eagerly awaiting the screens to open up and get sanitised so we can enjoy an outing, some pop corn, and yeah a screenplay!

While the topic would linger in my heart for long, I wouldn’t attempt watching the movie ever again. The script is too heavy to digest.
2D Entertainment amazon prime child abuse court drama FDFS Jyothika multiplex ooty OTT Apps ponmagal vandaal Surya