“You are a Socialite, I am a Socialist”, quips Nedumaran Rajangam when he is offered to be bought out even before he begins his airline business by a character who goes by the name Vimal Balaiyya. In another scene, Paresh Goswami tells his team that Vimal’s luck in the business is only until his father’s wealth remains. Later, we see Maara and his friends break away the Business Class Seats to depict clearly they are against the Capitalist system. Below the belt dialogues and scenes, but well, that’s what Sudha Kongara’s latest outing “Soorarai Potru” is all about. Hard hitting, agenda led and drama. And all this, with least reference to the main character on whom the biopic is all about, Capt. Gopinath, Former IAF Pilot and Founder of India’s first low-cost airline, Air Deccan. Sadly, the real life hero is given credit only at the end of the film with some of his real life photos and lifetime achievements. Atleast in theatres, some people watch the scroll till the end while on Amazon Prime OTT App where the film had a release on 12 Nov., most people would have skipped it.

As I had inferred in one of my previous posts that SP is not a true-blue biopic, rather a film that eulogises the hero and his efforts, the film is perhaps the career best for Suriya who’s back in action with his warm and emotional performance after a few years indeed. Aparna Balamurali who was earlier seen in Rajeev Menon’s Sarvam Thalamayam has done justice to her role as a rustic Madurai girl while Urvashi once again reveals why she’s a veteran. Sudha has given attention to a lot of details – some unwarranted though (it’s a film, after all) with references to similar names, caste bias, corporate references among others.

Maara alias Nedumaran hails from a small town near Madurai who’s father is a retired school teacher and believes in the right way to get things done such as writing letters to the Authorities for getting Electricity in their village and making a train halt in their home town Sholavandaan station among many such initiatives. Maara, the angry young man lacks patience and prefers instant results rather. He leaves home to join the Indian Air Force and has constant tiff with the Air Commodore, so well played by the mature and sauve Mohan Babu. He returns to his village to see his ailing father but doesn’t make it in time as he falls short of money to buy a flight ticket, even as he pleads the passengers at an airport. That makes him to think why could there be not a low-cost no-frills airline where one can fly at the same cost of a train ticket – This is perhaps the ONLY true reference to Air Deccan’s philosophy.

Maara trying to enter the ATC Tower or the Air Force Station in Tambaram is hyper-unrealistic and the fact that he doesn’t get shot during these escapades and killed by the CISF or the Air Force Warriors is even more filmy. Well, this is a film, anyway. How he wins over the rival JAZ Airlines and the crony capitalism that India is infamous for, forms the rest of the movie. There are two references to Reliance and Tata in the film – Reliance Fuel outlets where Air Deccan tickets can be booked and how even “Ratan Tata” has not been successful in getting an Airline operating licence in India all these years. Perhaps, a tad touchy issue but we need to wait and watch if the Tata Group is even going to react to this. 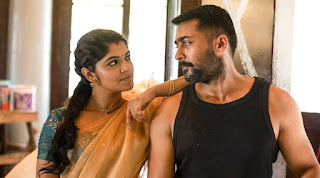 GV Prakash has given his career best in my honest opinion. Be it the songs or the BGM, he has done a fantastic job with two montage songs and two mainline ones. The Theme music released online during the Lockdown doesn’t feature prominently in the film though.

There is a depiction of the dark side of the Venture Capital world, how the sleazy ones try to capture ideas from unsuspecting wannabe Entrepreneurs and make the idea their own - such as how JAZ Airlines moves away from buying new aircraft to leasing them instead. We have heard and seen many such real life instances. The Indian Government machinery and it’s bureaucracy is shown in poor light but this film is not the first one to do so anyway. A classic example is how aviation rules are altered based on business needs from time to time. But in real life, Air Deccan actually benefited through some of these rules, such as no landing fees at Airports and Airstrips for Turbo-Prop Jets with less than 90 seats capacity.

How the Capitalists rule the world when it comes to the Wealthy getting wealthier; how Banks disregard genuine business plans and lastly why friends and family will always bet on an Entrepreneur who’s willing to give their own life to make his / her dreams come true. I loved the depiction of the idea – of a sparrow vs. pigeon when Maara’s idea of floating an airline takes a new dimension from moving away to smaller crafts compared to those made by Boeing instead.

A big takeaway from the film for me, as a former unsuccessful Entrepreneur “who couldn’t make it big as expected” having tried several options for over 5 years with hard earned savings and wife’s jewels among others, is that those who fail are those who don’t try hard enough. 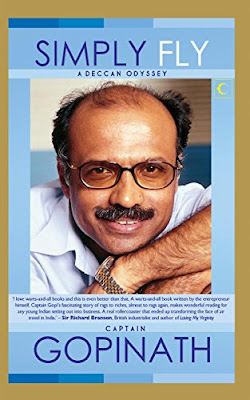 Amidst all this, I had clap-worthy moments thrice in the film: One when Chennai’s iconic “Woodlands Drive-in” restaurant is shown; another when Superstar Rajnikanth’s 80’s classic film “Mullum Malarum” is played in a local theatre in Madurai and lastly, when my real life inspiration, Former President Late Shri. APJ Abdul Kalam’s voice is played initially as well as when a look alike character is seated to listen to Maara’s flashback at Rastrapathi Bhavan.

As is the current trend, we had a late evening show even as the Kids were getting restless midway during some of the scenes. But they could walk away to their room and do something else and join us back, a luxury which they lack at Cinema theatres. After all, we were watching the film on our small screen at home with Home Theatre surround sound and Chennai’s Satyam Cinema’s popular pop-corn delivered through Swiggy. And we broke for dinner right after the movie was over. Small joys. 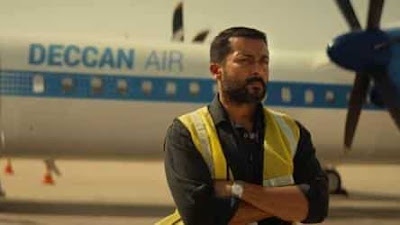 SP is an unrealistic biopic, since Capt. Gopi’s venture was always for-profit while the makers have tuned it to their convenience for business, political or personal mileage. Be it TSK or NGK, Suriya has been seen leaning to one side, though he has not made it clear which way he is in his real life, when it comes to politics and current affairs. Overall, the film is a complete emotional drama packed from scene one onwards till the finale. Since it’s on Amazon, I am sure many viewers are going to watch it once again. I am one among them