It’s quite often in life that we blame someone around us for something. Mostly, these are opinions and are usually not fuelled with facts and analysis. Much later, we realise that whom we felt was “guilty” of something perhaps was not. We do not remorse at the moment, nor do we proclaim loudly in public or on social media that we were wrong - I am being generic and generous here about human behaviour.

The Netflix movie “Guilty” is all about this human behaviour. As the movie ends, there could be a sense of introspection to some of us. Again, it’s mostly personal, I would say.

Joe Baylor (Jake Gylenhall) works at the call centre of #911, America’s police helpline, more as a punishment transfer for a homicide case that he has been involved in. He received a few calls, during the shift, one where a guy has been robbed by a prostitute and refuses to come out of the car to check the number plate of the car - he is terrified by the fact that such a thing happened in America (sic). He gets Joe gets another call where a Biker, presumably drunk, has met with an accident. That’s when he gets a call from Emily Lighton (Riley Keough), a woman who seems to be kidnapped and is inconsolably crying. She claims that the driver has taken her away from her house and that her daughter is apparently alone at home. She is unable to recreate the exact sequence of things which happened a few hours ago. Joe, who’s been separated from his wife Jess (Gillian Zenser) tries to reach out to his daughter to tell her “Good Night” but is unable to reach out to her.

Joe calls the California Highway Patrol (CHP) and asks them to catch the kidnapper who’s apparently driving in a white van and on the run, but the patrol teams are unable to catch them, neither do they take the call seriously. Even as Joe’s shift is coming to an end, he gets connected to Emily’s daughter Abby (Christiana Montana) who seems to be shocked at what’s happened at home over the past few hours. In a sobbing voice, Abby explains that her little brother Oliver is sleeping inside the room and that her father instructed her no to disturb the baby before taking away her mother. Joe gets very emotional seeing his daughter’s photo on his phone screen. One thing we could understand by now is beyond work and a divorce in the pipeline, Joe is hurt by something else and is extremely disturbed emotionally. 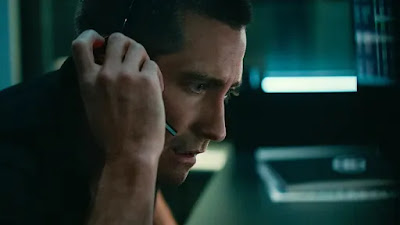 He reaches out to his wife Jess at 2am. Though she takes his call, she refused to accept his request for him to see their daughter. Joe requests his friend Rick (Eli Goree) to visit the house of Henry Fisher (Peter Sarsgaard) and look for any evidences or other leads that could help him to trace the whereabouts of Emily and Henry. Meanwhile, the local police reach Emily’s house to take custody of Abby only to find that Oliver isn’t breathing anymore and has been killed long back. Joe, at this stage gets temperamental and is extremely angry with Henry whom he things has killed the little baby and has kidnapped Emily in perhaps, a case for custody of his children. That Henry’s records show a 3-time imprisonment only adds to Joe’s thinking that he would be the reason for all the chaos. Joe calls Henry a couple of times to convince him to surrender to police while releasing Emily from his captivity but Henry refuses to budge.

Once again, Emily reaches out to Joe and continues to be terrified and Joe ask her to break Henry’s head with a stone when he opens the back door, which she does. But before that, he finds Emily’s voice and emotions convoluted ranging from one extreme of scare to another of relaxation and calmness. That’s when Joe finally realises that something is amiss. Finally when he gets to speak to Henry, Joe learns that it was Emily who has killed Oliver with a snake and they are now headed to a Psychiatric centre where she was admitted earlier. Joe is stunned with his judgement, misjudgement rather and is in a state of remorse, accepting he was the one who is Guilty. He recalls an incident when he shot dead and killed a 20-year boy who apparently misbehaved with his father and the next morning, there was a court hearing in which his friend Rick is supposed to say that it wasn’t Joe who killed the boy.

Joe is all of remorse and confesses at the court next day and pleads Guilty of his charges.

This is one helluva 90-minute emotional drama which is set in a single night. But when it ends, it does made me feel how I have felt about events and people, where I have probably also thought otherwise of them, many times when I was wrong. The film does make one feel “guilty” of the choice of impressions we have had on people around us. Trending in the top on Netflix. Watch in the late evening to relate to the mood of the film. Appropriate for young adults as well.