Set in the midst of a resort in Idukki, the film is all about the 11 men and women and the 12th man who uncovers a murder mystery. Jeetu Joseph, who made the classic Drishyam (Malayalam & Hindi) and Papanasam (in Tamil) is now back with his favourite hero Mohan Lal, The crew, obviously 11 of them, have given a terrific performance with each of them playing a significant role from the word go till the end.

Sidharth is engaged to Aarathy and they decide to throw a bachelor’s party to Sid’s classmates – 10 of them. Interestingly, but for one, all other are married within the group, so that makes 4 couples. Banker Sam and his wife Merin are a happy couple. Dr. Nayan and her husband Jithesh are not the perfect match, but they continue to navigate this relationship that is a marriage. Annie & Zacharia are about to become parents and decide to announce the big news at the party the next day. Shiny & Mathew are a couple who have their own excesses. Shiny borrows money from friends to live a high-life which annoys Mathew. On the other hand, Mathew hasn’t been able to fix his business losses and continues to borrow money from batchmate Fila, which annoys Shiny.

The film is based on story by Sunil Ketharpal and KR Krishna Kumar has kept the screenplay crisp. Cinematographer Satheesh Kurup has shown the visuals so beautifully that one would want to visit God’s Own Country right after watching the film, esp. during the monsoons now. Music Director Anil Johnson has scored a fantastic BGM though the 2 hour movie is sans songs.

So the 11 of them gather at a resort in Kulamavu in Idukki District after the opening scenes in Ernakulam. One can sense the camaraderie & the discomfort simultaneously between the couples and the characters right from the beginning. But it isn’t clear why would things go horribly wrong. When they all are playing cricket, a drunkard comes and messes around with them asking for a replacement of his broken bottle of alcohol. Followed by a small skirmish, things get back on place, though we see a short interlude between him and Fida.

While on the dinner table, each of them tease the other about their secrets and privacies. Fida, who smokes most of the movie, is the first one to say that everyone has secrets and with their own spouses, which irks everyone. Dr. Nayan is the next in line to tow her and says she has nothing to hide from her husband, followed by Merin and Shiny. This upsets the men and they are also forced to concede they hid nothing. So, a game begins. Everyone must keep their mobile phones on the table and any message that comes shall be read aloud and all calls would be on speaker. Group Messages could be avoided, as they are mostly junk. Initially everyone is disgruntled but eventually agree to the challenge. Each of them get calls, from their uncles to Mom to a Creditor to a friend and so on. What starts off as a fun challenge gets a bit too embarrassing. That’s when groom to-be Sidharth’s friend calls to enquire about the girl within the group whom he impregnated. Bride-to be Aarathy is shell shocked, so are the batchmates who suspect their own wives. 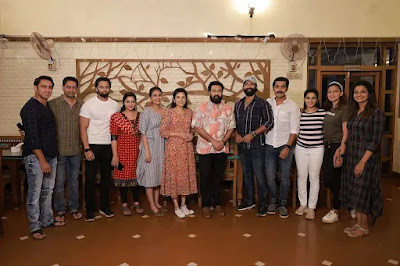 In the melee, there is some physical altercation between the characters and they end up in their own rooms shortly, only before vowing that Siddharth must confess who was the girl. Some of them are walking around, few in their rooms upset while Fida continues to smoke even as the men get drunk further. Within a few minutes, there is a scream and we see Shiny lying in a pool of blood on the rocks. Cries and wails follow with the Inspector Vipin visiting the crime scene to investigate. That’s when he accosts the 12th man at the resort, a friend of the Resort Owner, Former Dy SP Chandrasekhar (Mohan Lal) who is enjoying his last day of suspension. Over the course of the night, DySP analyses and investigates all 10 of them, in a closed room, on a long dinner table, even as they face each other, making them open up with their deepest, darkest secrets which their own spouses do not know.

Who killed Shiny and what was the motive, remains the enduring 60 mins of the film Watch on Hotstar.