- July 26, 2020
The Tamil month of Aadi (Aashada in Sanskrit / Hindi / Kannada, etc.) began on the 16th July 2020. Generally considered inauspicious, the traditional texts do not consider these months unholy, rather advises believers to focus on pujas, rituals and offering to forefathers, fellow humans and to deities in temples. It is more of a practice in Tamil Nadu not to release Films during this period, no matter what’s the caste or belief system of the lead Actors & Directors, as the Producer has the final say in this matter.

Starting from mid-August onwards, Tamil Cinema usually witnesses a dozen big releases of top stars as well as the usual 3-4 small budget film releases every week. However, during the Aadi month, even film pujas, music release functions, Award functions, etc. – nothing is conducted. Or so we thought all along.

Aadi month 2020 saw a surprise from one of the most celebrated duos – Anirudh and Sivakarthikeyan when they released a surprise video song of the latter’s upcoming film “Doctor” which is still under production. The peppy love song highlights the ban on Tik Tok App while also enticing the listeners with quirky lyrics by the Actor who is also Producing the film. The video song which released on 16 July on Youtube has already become a huge hit and has garnered Ten million views while publishing this article.

LR Easwari’s “Chellatha, chella Mariyatha” is one of the most famous and celebrated songs that croons on loud speakers during the Aadi month when most of the Amman Temples have festivities every week with the first and last Friday hitting the peak with crowds thronging the precincts to offer their obeisance and to seek Her blessings. This year, the celebrations have been muted due to the ongoing Corona lockdown with almost all the 30,000 Temples in the State having been shut since 25 March 2020. And with limited or no access to visiting temples, “Chellatha” has found fewer takers even on Mobile Music Apps and has been replaced with Chellama hitting the Chartbusters for second week in a row. 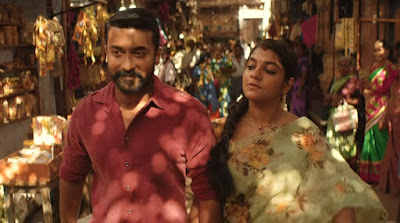 Surya’s upcoming “Soorarai Potru”, a biopic of Capt. GR Gopinath, an Air Force veteran turned Founder of Air Deccan is seemingly ready for release while the Producer, Director Sudha Kongara and Surya remain mum whether the film would have a  traditional theatrical release or a direct OTT release just like his wife Jyotika’s Ponmagal Vandhaal. However, the crew released the third single from the film on 24 July to mark the Actor’s 45th birthday – yet another walk away from traditions and has garnered 1.80 millions views as of today. However, there seems to be a reason for this too.

While Capt. Gopinath originally belongs to the Brahmin Community, that of Surya's character is unknown though he eulogises the lower caste communities in the film which is reminiscent from the lyrics of the previous single “Mannurunda” which actually mocks traditional caste practices in general and in Tamil Nadu in specific while celebrates those of the downtrodden communities. And that the latest song seems to be a wedding montage as per the visuals also has a message in the background which reads "Inai Erpu Vizha" loosely transliterated to "Mutual Acceptance Celebration" – that the lead couple solemnise their wedding in the film as per the freehold principles of the so called “self-respect marriage system” ideology propounded by the Chief Architect of the Dravidian movement, veteran EV Ramaswamy Naicker, with no Thaali (Mangalsutra) tied to the Bride, Groom dressed in a black shirt and announcing their acceptance as couple on a microphone to the attendees.

Sudha and Surya who belong to the Brahmin and Kongu Vellalar Kounder communities respectively have played a coup with this casting, I must say and with releasing a new song this Aadi season, there is a huge change in how Tamil cinema operates especially on religious grounds and ideologies. That neither of them have direct political allegiance to the Dravidar Kazhagam or allegiance to these practices in public is well known although Sudha has worked with ace Director Mani Ratnam for a good 7 years in multiple projects. 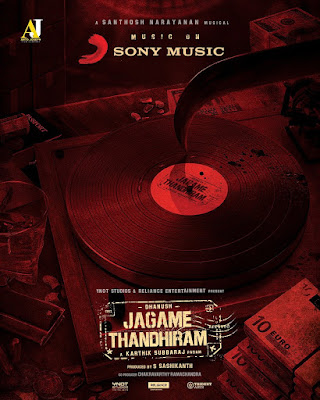 Dhanush’s much awaited Jagame Thandiram will have a music release of it's first single "Rakita Rakita" on the Actor's Birthday on Tuesday 28th July as well. More music album releases are in the anvil an I wouldn’t be surprised if even a full-fledged Tamil film releases during the Aadi month on an OTT platform. Change is always good, we say. As long as the change is not to appease anyone, is done in right earnest and brings a positive impact to the society, I am sure everyone is going to accept it as well as celebrate the change.