I simply happened to see the Trailer and was fascinated with the mere thought of listening to a Bengali family’s tales for over 2 hours and decided to watch the film. Having worked in the sweet city, having mishit doi and a kathi roll for dinner with my mere savings for a year, I felt at ease living in the city of join 20 years back. I have made some friends for life and still in touch with many but have never seen a full-fledged movie ever. This was the chance. And in less than 1 year, my colleagues at work ensured I learnt conversational Bangla. So the movie’s trailer was intriguing enough for me to catch up last Sunday. 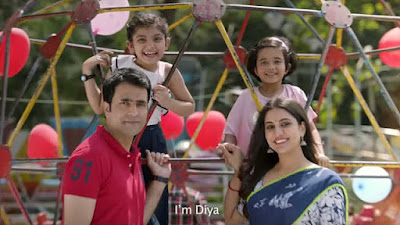 Switzerland – yes, that’s the movie name is about a family of four, a couple and their two little daughters who dream of travelling to the European country. Rumi (Rukmini Maitra) is a school teacher in downtown Kolkata and teaches Geography. Shibu (Abir Chatterjee)  is a salesman at a Mahindra dealership and has a love marriage, the bride being from a very rich family who’s many family members still not approving the wedlock. The happy couple and kids live a postcard life with the pangs of a middle class family torn between living a high-life and also saving up a bit for the rainy days ahead. Life goes well all along.

During a luncheon at her place with the extended family, Rumi’s cousin teases them to visit Australia where her brother is currently employed at, saying they could get their stay and food absolutely free. This rubs Shibu’s ego and in a fit of rage, he says that they are planning to visit Switzerland the next summer and hence not want to visit Oz. Everyone in the room is shocked, including Rumi who didn’t expect such an audacious counter from poor Shibu. 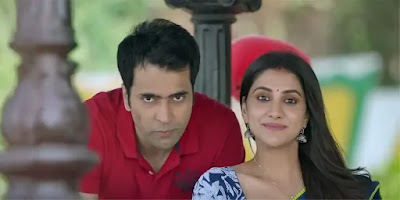 From the very next day, they decide to save every bit of expense possible, from cutting down on Pizza and Mutton, moving to leafy vegetables, eggs and Macher Jol; from not ordering food outside, cutting off the house maid and so on. In the background is next door Uncle who’s wife falls ill often. Since Shibu has lost both his parents, he is quite attached to the elderly couple and both Rumi and he take care of them though their only son who resides abroad neither sends them their money nor takes care of them.

To earn more money, Rumi starts taking tuitions for children while Shibu doubles up as a Cab driver after office hours. One day, his Father in-law ends up as his “customer” and the two have an extended chat over a kulhar of Chai along the seaside when the old man opens up about his own family’s shortcomings and why some in the family are opposed to their marriage although he is open-minded to the idea always. On his way back, Shibu picks up a girl and 2 guys in his cab ride who try to molest her and he becomes the angry-young man – (inspired by Mithun da perhaps) and thrashes the bad boys before the police arrives and rescues the girl. Only upon getting severely injured does Shibu inform Rumi about his second job. Emotions and Drama follow.

When the aunty next door falls severely ill and finally breathes her last, Shibu decides to pay the last instalment (saved over months) for he hospital bill that was to be paid to the Travel Agency for their Swiss Trip & Visas and takes care of her last rites. Still, he wishes to earn some quick buck and ends up at the local Casino where he had been in the past once. To his good luck, he earns a good sum but to his bad luck, Bengal Police catch him red-handed with his booty – hard won against his opponents over a game of poker and remands him. Rumi and Shibu try to reach to the Cop who rescued the girl earlier to prove his innocence and his intent to earn the money. After a severe warning, he is let go of.

Does the family really make it to Switzerland? Well, most Indian films have a happy ending isn’t it. This one too, after all. And I won’t be surprised if this film has a sequel – how the Bongs fared at CH. Am sure that’s a good 2 hour content too! The movie has 4 songs, all passable. The Cinematography is too good to watch, especially for someone like me who loves the city in every frame and the film has a fitting Pujo sequence as well. Sauvik Kundu has done well with the movie, entertaining the masses at theatres and on OTT. the film, no doubt will be watched several million types by the audience over the years. Available now on Prime.
abir amazon prime bengali Cinema Rukmini maitra Switzerland travel Weekend