A war which is unending, sabotage by those whom one trusts, enemies within and to top it all, a biological war in the making by spreading a man-made virus stored in a vial – I am not referring to the ongoing Ukraine crisis coupled with the Covid-19 led lockdown which is celebrating (sic) its 2nd anniversary today in India. Operation Black Crab is a movie set somewhere in Scandinavia where a fighter reaches her destination for just one reason – Hope!

We have seen war movies and many of them. From classics like Ben Hur to the current times’ Outside the Wire, 2 Guns and so on, there has been enough and more where soldiers and fighters use various weapons, fly across regions and use sophisticated guns and revolvers among others. But Operation Black Crab is different. The soldiers use skateboards. Legends! 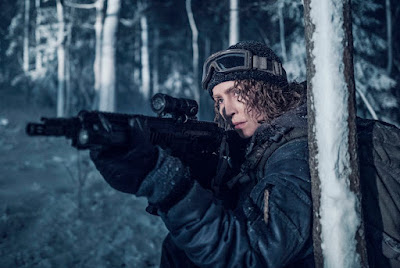 Caroline Edh (Noomi Rapace) skates all the way across an archipelago to deliver a courier to the “base” on the other side which would perhaps end the war. Or so she thinks. The single mother takes this extreme effort – a suicide mission – as she calls it in the internal briefing, only to reunite with her daughter Vanja (Stella Marcimain Klintberg), who is said to be in the refugee camp of town Odo.

With a team of 4 fellow skaters, Edh must skate for days together, a feat which is almost impossible to achieve. They have to skate because the water, rather the ice is so fragile that one cannot walk on it. Neither can they row a boat, because it is semi-frozen in most places.

Earlier, Edh and her daughter Vanja are trying to escape from one of the many parked cars. We assume that this is because of the sudden crisis in town due to a war-in the making. In a shootout, the mother-daughter duo get separated. Edh continues her life as a soldier and is deported to a “military base” where she meets her fellow compatriots. Based on Colonel Raad’s (David Dencik) advise to reunite with her daughter, Edh decides to take part in the mission. She doesn’t have a choice, rather.

Midway, the team of 5 suspect Malik (Dar Salim) to be a traitor when enemies try to apprehend them in a hideout. Just that he confesses that it was his girlfriend he was trying to reach out to,

who is stuck in another base. Subsequently, he gets killed in the next firing. Karimi (Ardalin Esmaili) and Granvik (Erik Enge) also die subsequently in various gunfights with the enemies, who attack from all sides, covered in white, snow coat replicas. 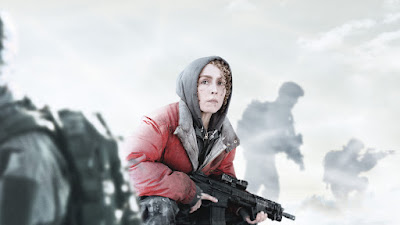 Nylund (Jacob Oftebro) who leads the mission steals the vial containing the virus from Edh and proceeds towards Odo, the military base on the other side but Edh suspects him to be another traitor and shoots him down even as he is skating vigorously. Only to later find that he was just doing his job, in an urgency to end the raging war. When Edh wakes up, she finds herself in a hospital and getting treated for all the injuries afflicted to her on the way due to extreme cold conditions. She also gets promoted as a Lieutenant for her ferocious and victorious sojourn. However, she feels sorry for having done the wrong thing of transporting the vial all the way for two reasons – one her daughter is not in the island of Odo. Second, the vial of virus could cause complete extinction of humans in the region, which is not only unethical but would end the war differently.

She jumps off the cliff with the vial along with a detonator and ends the bio-war even as helicopters shift all the occupants of Odo for one last time.

The movie is set all through the night, except for a few day time scenes, which are also canned in full snow. So watch the film late night or in a dark surrounding, so you get the feel of it.

Written and Directed by Adam Berg, the movie is based on a novel by the same name, written originally by Jerker Virdborg. Available in English language audio and subtitles on Netflix.