21 hours is a slick thriller who’s screenplay is set in 21 hours time. A lonely wife to a supposedly gay husband wants to move out of the relationship and the household. In a chain if events, she gets killed. Who triggered the bullet, find Investigative Cop Srikanth (Dhananjaya).

Madhuri Menon (Durga Krishna) is married to Renjith Menon (Sudev Nair) and fight almost every other day. Her Mother in-law keeps teasing her that she is yet to deliver a baby but Madhuri feels to shy that there is no physical relationship between the couple. Fed up of the feud, one fine day, she simply walks out of the house and accosts her former Ex and now friend Vishal Nair (Rahul Madhav). She informs her parents what she has done while her father Girish Nair (Dinesh Babu) requests his an old acquaintance Joe Machado (Ravikumar Rao) to help her in the mess. Joe connects with a Minister (Dinesh Mangaluru) who in turn connects him with someone else. And all this happens late on that fateful night. 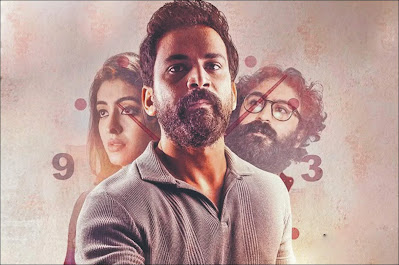 Early next morning, Inspector Srikanth enters the screen and takes all the above in to a private custody and houses them in a posh 5* hotel in Bangalore. He also quickly establishes a war room, with his assistants Veda (Apoorva Bharadwaj) and Aryan (Poornachandra Rao). Whether all this is acceptable under law, who pays for the expenses and his repetitive coffees - no one knows as this is a movie. Over the next 12 hours, he quizzes each one of them and brings about their darkest secrets. That Renjith has to accept he is a gay in front of his mother, that Madhuri is Girish’s foster child from his wife’s previous marriage, that Joe sends photos of good looking girls to an agent and so on.

So who killed Madhuri? Or did she commit suicide, fed up of her life? Why is Inspector Srikanth taking so much interest in this case? Watch on Amazon Prime to find out.

Directed by Jaishankar Pandit and co-written by him alongwith Balasubramanya and Vinod Sudheer, the film has no songs but the BGM score is well made by Rupert Fernandes. Cinematographer S. Tirru and Editor Richard Kevin have shown the picturesque Bangalore well and kept the film slick in under 2 hours. From the various angles shot, it seems the movie was made mostly at the Oakwood residences, located inside UB City, with a glance of the sprawling Cubbon Park and the ubiquitous Coffee Day Head office.