I have been on thousands of flight trips over the past 20 years, mostly on work. But when I was watching this  movie on a small screen, I was more tensed & worried than ever - not about the safety of flying, rather the nervous moments each Pilot, Co-Pilot & First Officer go through before every take off, landing and everything in between. Runway 34 is an excellent portrayal of what runs in the mind of such a pilot and his colleague, in a 2 hr suspense drama and mostly a fictional depiction of real life events. Produced and Directed by Ajay Devgan, the film was released on Amazon Prime on 14 July after a few weeks of theatrical run where the movie didn’t do well. 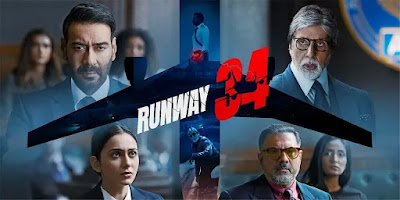 On the midnight of 16/17 Aug. 2015, a Boeing 777 aircraft owned by Skyline Airway Company is flying from Dubai to Kochi. Capt. Vikranth Khanna (Ajay Devgan) takes the throttle along with his First Officer Tanya Alburqueque (Rakul Preet Singh). Just the previous night, Vikranth parties hard with his friends in a night club, downing a couple of drinks before reaching back to his room and sleeping all day. Tanya has a fangirl moment flying along with the celebrated captain who had done a marvellous landing many years before at Hong Kong. Before the flight begins, Vikrant takes a Disprin tablet as he is undergoing a bad headache. Tanya finds his behaviour a bit odd but he comes across as a sauve, seasoned pilot who knows his job well with over 16,500 flying hours to his credit while hers is just about 500.

As the flight is approaching Kochi Airport, the Air Traffic Control (ATC) Centre advises them to proceed to a neighbouring airport - Bangalore, in this case as there is in inclement weather due to heavy rains. The Pilot refuses to divert, as it may inconvenience the 150 passengers and insists to try landing at Kochi. After several attempts, he decides to divert to Trivandrum Airport instead. With a sudden cyclone approaching the airport, the ATC at Trivandrum sends an advisory to the ATC at Kochi not to divert any flights there. Due to the sudden ill-health of the Air Traffic Controller, this message doesn’t get passed on to the Pilots. Only when they reach Trivandrum, do they realise the grave danger they are in to.

After a lot of struggle, the flight lands up at Trivandrum Airport, even as the Pilot makes a daring landing with his eyes closed. All passengers land safely, though an old lady passes away a few hours later on the way to the hospital. As is always the case, the crew is set to face the Aviation Investigation Bureau for a thorough interrogation of what happened that fateful night. Narayan Vedant (Amitabh Bachchan) leads the case and what follows over the next 90 mins is a court room drama. Does Capt. Vikrant Khanna come out a hero, as hailed by the media right after the daring landing on a rainy, cyclone night or is he declared a criminal for taking emotional decisions, endangering the lives of the people and the city at large? Watch the movie to see how it unfolds. Nishant Suri (Boman Irani) as the owner of Skyline Airway Company, is depicted similar to mannerisms of none other than Vijay Mallya of Kingfisher airlines. Other characters played by Akanksha Singh, Angira Dhar and Hrishikesh Pandey have a short yet significant presence in the movie. Though the OTT edition is quite long, the first half is more engaging than the second. Enjoyable once for sure.