There is nothing bigger than a remorse when one loses his/her child. In this fictitious account of one such man, we see emotions flying from a loving dad in memory of his son. 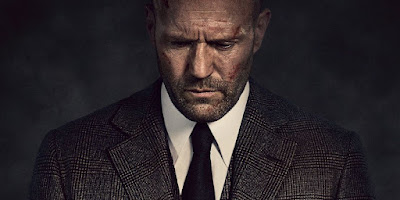 Mason Hargreaves (Jason Statham) is a crime warlord with his group of colleagues Mike (Darrell D’Silva), Brendan (Cameroon Jack) and Moggy (Babs Olusanmokun). While overseeing one such heist of a Cash Truck, his son Dougie (Eli Brown) is shot down by the masked perpetrators. He is also shot down to death, though he recovers from the wound. He joins the Cash pick-up firm Fortico through the influence of team leader Terry Rossi (Eddie Marsan). Though he barely passes the required tests to join the fleet, he somehow scrapes through the marks. His colleagues Dave Hancock (Josh Hartnet) and Dana Curtis (Niamh Algar) are suspicious of his motives but none are able to find out anything about his past. The company’s trainer Haiden Bullet Blaire (Holt McCallany) names the new joinee as H and is part of the crew to pick up cash.

During one such routine, there is another heist. Much against the protocol, H intercepts the hackers and rescues Terry. FBI initiates an investigation regarding his daring rescue mission but is unable to get much from him. The senior FBI Agent King (Andy Garcia) tell his team to leave the case just at it. The seniors at Fortico decide to bench him for a couple of weeks but the CEO Blake Halls (Rob Delaney) decides to reinstate him back in the crew for pick up. H meanwhile goes behind the lives every person in the company to find out if there were any perpetrators within the team.

A group of disgruntled veterans Jackson Ainsley (Jeffrey Dodovan), Jan (Scott Eastwood) Brad (DeObia Oparei), Carlos (Las Alonzo), Sam (Raul Castillo) Tom (Chrisa Reilly),  decide to hatch a plot and rob cash pick-up vans. During their first outing is when they end up killing the two guards at Fortico and Doggie, leaving H injured. They are back again, this time to break the Fortico Depot on the Black Friday weekend. Jackson, the head of the group makes a solid plan to break in to the warehouse and Bullet confesses to H that he is indeed part of the plan, and that he should support the entire sequence lest he would get killed. Jan is obscured by Jackson many a times for playing outside the script, especially for killing the bystander during the previous heist (Dougie). Jan hates the leader for this and decides to make good for it. 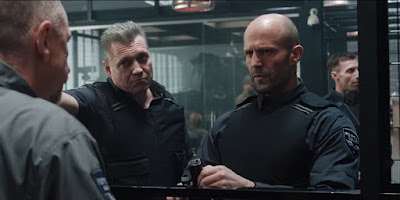 H awaits the day and eventually kills everyone of them over the next 30 mins. Jan kills Bullet and Jackson as well and tries to flee with the entire bounty. Finally H kills Jan by planting a mobile phone in the cash stash, thereby tracking the whereabouts of Jan. Jan is killed by Ha at the same place where he had shot Doggie. While the entire stash of cash remains there, H leaves forever after informing Agent King that he is done.

Wrath of Man is an out and out action thriller, though it’s not the edge-of its kind one. Jason Statham has this knack of always remaining stiff in his demeanour yet delivers his best all along while emoting well. Directed by Guy ritchie, from a script he co-wrote with Ivan Atkinson and Mam Davies, the film is loosely based on the French film Cash Truck.