Among the most awaited movies of 2020 was Vaanam Kottatum. In a typical Mani Ratnam style movie (story & script is by him, btw) with a star cast that’s been resplendent over the past few years in his movie, Director Dhana sends home a message of, duh. Actually nothing. 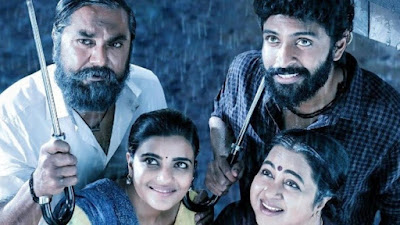 VK is a family drama, a non-gripping father-son story that also involves the lives of those around. As is the case of many of the ace Director’s films, the story is loose with many open ends and makes the viewer wonder why certain characters even appeared. Like MJ. Sriram who’s only purpose was to offer a drink to a stranger who ends up at his home while there’s an IT Raid going on (we don’t know what business he ran and why they were there) at his scenic ECR-styled bungalow. I sincerely hoped this movie to be a head turner for Vikram Prabhu and Shanthnu Bhagyaraj, a sort of coup with kids of two yesteryear heroes coming together. But that wasn’t the case to be, finally. Shanthnu barely gets to share screen spacer showcase any talent  while Vikram, although seen from Frame One till the end barely makes a mark, but for his stoic responses – something we have never seen in the acting skills of Late Sivaji Ganesan or Prabhu. Humour and instant facial remarks, a trademark of the the real-life Father Son is still seen missing in the budding actor who is ready to take off but the runway looks hazy. For years.

Aishwarya Rajesh stands apart with her performance while Madona Sebastian adds no value for herself all through the film, though we saw her sobbing, a rarity given the fierce and bold looks she carries on her shoulders in all her previous outings. 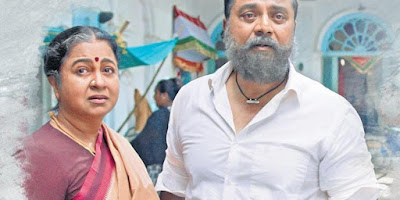 Raadhika-Sarath Kumar have offered us a punching togetherness coming on screen as a duo after over two decades and boy, we are not disappointed. The scene where the actor displays his rear-side muscles and arms – no one would believe he’s over 60 years age. With his typical knack of combining humour, short temper and emotive acting, Sarath steals the show till the end. Balaji Sakthivel adds significant value all through the film and has done the role offered by the Director after an impressive outing last year in the critically acclaimed Asuran.

Sid Sriram’s first musical and he doesn’t let us down. The film is actually a musical with the BGM ranging from montage songs to tunes of the songs in continuous play from the first scene till the end credits. All the songs have been sung solo by him but for one where he shares the mic (briefly) with Shaktishree Gopalan. Three songs went on to become Chartbusters although the album would remain on the bottom of the list of “Top Hits of the decade” thanks to it’s varied music and sound. 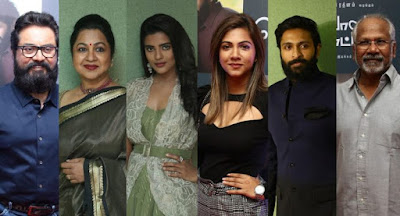 Cinematography by Preetha Jayaram (niece of PC Sriram) is awesome with some amazing frames captured through the sun and rain. The drone shots of the city, especially the Koyambedu Market have shown my Madras differently than what we perceive through our eyes every day. The film hit the OTT platform (Amazon Prime) within 7 weeks from its theatrical surprise, no surprise as the film didn’t make a mark at the Box Office and the ongoing Corona Crisis hasn’t helped it either.

Overall, a good to watch movie at home.

Oh, btw – the film’s storyline, I forgot. A rustic man kills the guys who attempted murder on his brother and goes to jail while his wife fights odds working in a printing press and brings up their two children. When he returns to them after 15 years (or so), the Kids don’t have any attachment for him left. Over time, they accept their father and his unconditional love. Narrated brilliantly over 2 hours and some minutes. Watchable once.