A young muslim boy aged 7 was distributing newspapers in a quaint town of South India many decades back. His school teacher who was a Hindu, identified him as a bright young man in the making and encouraged him to study well, though the boy had to still make ends meet for his poverty stuck family. Today, the entrance of Rameswaram, the town that he lived and grew up has an edifice of his lifetime work in the name and style of “Kalam Memorial” where a rocket that he commissioned in his early years stands proudly showcasing his years of work and dedication, before he eventually became the First Citizen of India and made his homeland proud. Other than this, there are many many such examples of people who have come up, literally from the rags and have risen to higher echelons of the society, in the professional, entrepreneurial and even political space. The White Tiger, now streaming on Netflix is about this phenomenon – Poverty Porn – as the name that has been coined for this as a reference. 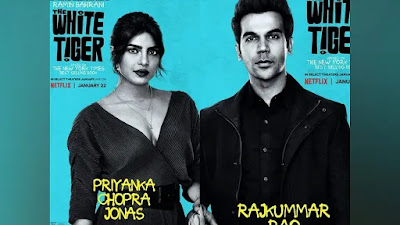 The film showcases the hardworking people of India who have also been downtrodden and stuck with poverty ever since India attained freedom. Iranian American Director Ramin Bahrani tells his audience how India’s extremes are perhaps the worst globally where we have become among the Top 10 Economies of the world though the displaced and the marginal society members have unfortunately not been bought up by successive Governments all these years. He tactfully informs us the growing divide between the two religions / the two sects / two types of Indians – the haves and the have-nots as they are known after all. In a screenplay which is more of a narrative / monologue format, the film’s protagonist (not sure if that’s the right reference!) shares his growth story as a Social Entrepreneur from a faraway hamlet in the Bihar all the way to his rise as someone who manages a large fleet of vehicles for Call Centres in Bangalore. What Ramin doesn’t want to explain is why he chose a Hindu society for this narrative and if it’s just the norm, rather than an exception. Or why he ridicules Hindu beliefs, prayers and way of living while he has a sly reference for a Muslim driver who’s remained loyal to the same rich family in the guise and garb of a Hindu. Well, somethings are best unexplained, you see.

The film is a stark reality of how unjust and Crony Capitalism has creeped in to Modern India and how the so-called Socialist reforms of Chacha Nehru have been left neglected in the guise of growing our GDP, Economy, making the popular, mighty and powerful people richer with Government’s support and the politicians, controlling our life from our basic necessities all the way to what we eat, drink and consume, whether made / grown in India or those that are imported. After all, the Government has a say in CKD Merc Cars, California Almonds, Dates from the Sheikhs and the more priority stuff such as Victoria’s Secret and the Apple iPhones.

Just that the makers forgot to remember that this movie should have been FTA in Cable Tv channels pan-India and not on an International OTT platform which charges 10x of an Indian equiavelent. Socialism (pun intended) at its best by the preachers.

Balram (Adarsh Gourav) is projected as a lower caste Hindu (there’s no such thing in our Sanathana Dharma, btw) in Bihar’s Lakshmangarh near Dhanbad who’s family and village members are controlled by a powerful upper-class family. Being a large, joint family, Balram who went to school as a child and learnt basic English (in the 90s!) is forced to undertake odd-jobs and eventually becomes the Landlord’s (Mahesh Manjrekar as father and Vedant Sinha as his son) family driver which he has been dreaming for many years. The attitude of servitude by India’s middle class, a feeling of being loyal to their Masters has been ingrained in our minds all these decades and so does Balram. However, he finds his way to earn the trust and most importantly, the respect of the Landlord’s US returned younger son and his wife (Rajkummar Rao and Priyanka Chopra “Jonas”) and drives their Pajero even as the family lives in an upmarket highrise apartment in NCR while he and other drivers remain in their dingy tenements. 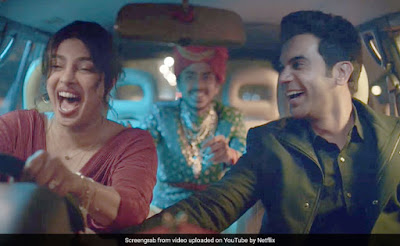 Over time, Balram realises that the Masters are not as loyal to their employees as they claim to, even though they call them as their extended family members, and he should just reciprocate. Balram, who is privy to most private conversations of the Masters decides to run away with the Master’s money – approx. Rs. 40 Lakhs and uses the same corrupt ways that the Masters use for their survival managing the bureaucrats, the police and politicians and over time rises as a Social Entrepreneur while ensuring he takes good care of his employees and not treat them miserably while calling them as his extended family. Wow. 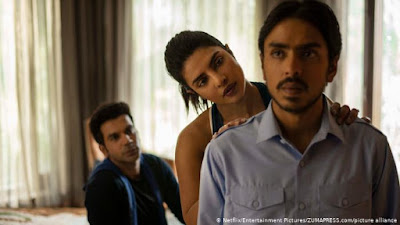 However, I wouldn’t be surprised if the film bags a number of awards, same time next year for it’s “moral stance” and showcasing India’s dark and stark reality. Well, until we live another day to watch such films on Netflix paying Rs. 500 pm, films like The White Tiger, based on Arvind Adiga’s book in the same name would continue to intrigue the audience. Happy weekend.

PS: I sincerely hope they don’t make a “World Cinema” to glorify 26/11 gory attacks at Mumbai or a movie to justify the sewing machine provided for Nirbhaya’s juvenile rapist - after all, films like this catch a lot of attention globally and are award worthy. Please, No.