"the loneliness had nearly unhinged her"

deprive of stability; throw into disorder.

"a chain of events unhinges the structure of his family"

Three things I learned early in my life to lead a better life – use PST liberally and without any hesitation or shame as the situation may be: Please, Sorry & Thank You. In many occasions, this has come in handy; in some it didn’t. After all, it requires a lot of grace to say these three words. And a lot more to accept them. Unhinged is all about one of these words. And how someone can bully another. Who bullied who? Later in this article. 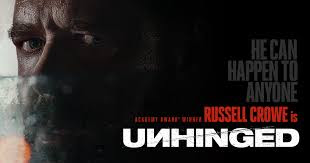 Rachel, very well played by Caren Pistorius, a single mother (in the making) is a distressed person due to various reasons and lives with her son Kyle (Gabriel Bateman who is in real only 14 years younger to her). While she’s rushing to drop her son to the school as she over-slept, she gets in to an unwarranted verbal duel with another roadie (Russel Crowe) at a traffic signal. And his annoyance was because she blared the car horn and later, refused to seek an apology citing she was having a bad morning, already although he apologises to her for being a bit lost and for not moving. Her ex-husband was demanding the house they lived together as settlement, says her Counsellor & Divorce Lawyer, her mother who lives in an Adult Home is depressed, one of her main clients has fired her as her Beautician because she is eternally late every other time and her many other such miseries.

The Man, simply seeks an apology for her road rage which she refuses to. What follows on is a cat-and-mouse story which moves from the road to a fuel station to her house and finally he attempts to take revenge for her attitude by killing her and her son. Does he eventually kill them and walk away? What is 911 doing all along? Interesting screenplay and a good hunt. 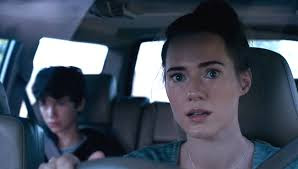 What’s surprising is that such a movie featuring one of the most celebrated stars is so weak that the lady is just unable to drive into a Police station. The Man, who refers himself as Tom Cooper in one of the scenes is already a killer, at 4am the same day after he hits a couple with a hammer and sets their home on fire. Later in the script, he kills the Divorce Lawer Andy which is when the audience may expect that he too had a flashback involving his wife – since he removes off his wedding ring before committing such a heinous crime. Thankfully, there was no such flashback and the audience is left to their imagination.

Russel seems like a big bully in the film driving around a Ford pick-up though he really didn’t put on the weight rather just used prosthetic make-up to appear that way. Director Derrick Borte seems to have caught the attention of the audience with a racy script though it’s very filmy and predictable. Very many loose ends all through the film and the US Cops appear like our desi-ones entering the potential and actual crime scenes at the End. However the subject is immersive and this road-rage can happen to anyone of us. Perhaps, we all have been affected some way or the other. In many such instances, we easily tend to blame the other person on the road who causes irritation to the one who’s driving. 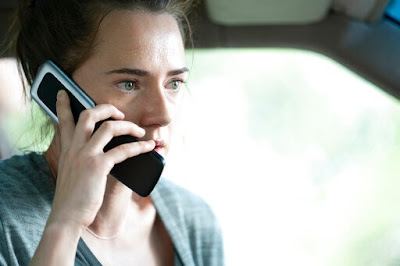 However, it could also be because the driver herself / himself are late to their destination and perhaps, they are the reason unknowingly. Being a Marketing guy all along my career, I enjoy the music in the car – my collections or the radio while driving. While many see this as a distraction, it also depends on what we hear. When we play familiar music, we get drawn with memories and hence it could have a possible negative reaction on other road users. So, the obvious choice is happy, enjoyable music which is soothing and pleasant. The other thing that irks many is having a phone call while driving and the negative reactions in the conversation which are shown on our driving. Much has been said about using the drive / ride to hear positive stuff – from podcasts to soothing songs, having a chat with friends / loved ones (though it’s still illegal in India as per the MV Act to use bluetooth audio while driving!). The best is to focus on the road and not road users by avoiding eye-contact and half the problem is solved. Using the pauses to meditate is even better! Or, may be sip Coffee. What say?
amazon prime Cinema movies pandemic russel crowe theatre Thriller unhinged