There are days when we just want to spend the day lazing around doing nothing. We pick up chores which are worthless, useless and a complete time pass. At the end of the day, we regret how we lost a precious day in our lives. At times, we feel happy that we ended up the day doing nothing and smile at ourselves. BaB2 is such a regretful day in one’s life, just that the makers spent a fortune (or perhaps not) making such a film, after all. The first edition feat. Amitabh Bachchan, Rani Mukherji and Abhishek Bachchan was a cult film, in a sense that it was a combination of a mild thriller, a comedy and ending up as a drama. But the sequel neither of these and is a long bore at best. 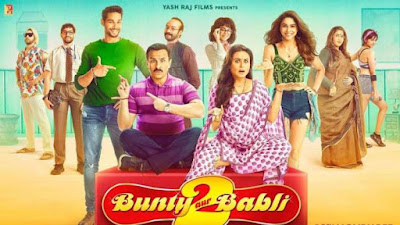 BaB2 opens up with a bunch of rich Dilli businessmen ganging up with alcohol glasses on their hands in a pool side villa with young girls in scantily dressed clothes. The event organisers Sonia Rawat Kunal Singh lure the men to a private destination that is known by the name “Virgin Islands” where, well as one would imagine, gets to do party-sharty the Dilli-way but with absolute privacy from frying family members. They agree to pay Rs. 5 lakh each, a dozen of them perhaps only to arrive at the private plane terminal at the airport where they are caught by the police and skinned. The duo have actually conned the men with their alias that is “Bunty Aur Babli”, the eponymous couple of the previous decade who pulled on so many such con jobs and remained elusive. The plan to continue more such acts.

Meanwhile, Jataayu Singh apprehends Rakesh Trivedi and his wife Vimmi Saluja Trivedi at Phursatganj in UP where Vimmi is a modern auntyji homemaker managing her only son Pappu and her husband is railway ticket issuer. Jataayu was JCP Dashrath Singh’s junior in the past when the senior cop let the original Bunty aur babli to go as none of the charges against them could be proven. He assumes that the couple is behind the latest scam only to realise that they aren’t. Meanwhile, BaB2 continue their con jobs, this time at Varnasi awarding a Government-like scheme to the city’s Mayor Chutvaa Chaubey and go scot free. Vimmi and Rakesh decide to break the sham the new BaB2 are and assist the cops to catch them. The movie now moves to Abu Dhabi, courtest Abu Dhabi Tourism!

In a boring screenplay the ensues for the next 30-odd mins, the two couples chase each other and make the flimsiest of dialogues and an even sillier song sequence. Without revealing their identity, BaB make the couple come back to India and stash their Rs. 200 Crores of money earned in Varanasi to be converted to white money through Hawala. Enter veteran actors Israni and Prem Chopra. Seriously? Now the movie showcases Goa. Duh. 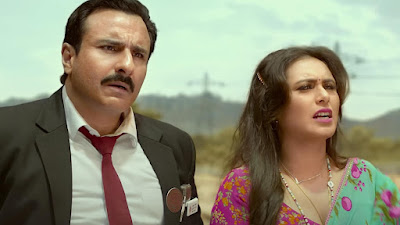 After a cat and mouse chase, the young Bunty aur Babli are check-mated by the senior couple. However, after hearing their sob story and their reasons to become con-masters, they agree to not only help the youngsters but also decide to make a new life and settle abroad. Jatayu Singh is left red faced even as the quartet escape from India to live a high life abroad. Hopefully, they don’t end up making a sequel to this film. Please spare us.

Produced by Aditya Chopra through his Yash Raj Films and directed by debutant Varun Sharma, the casting is not only poor but rather quite despicable. Saif has lost his comedy streak (did he have one!), well atleast of what we saw him in films of early 2000s. Rani has been loaded with make-up which makes her look more aged than she probably is. Siddhant has made a good try and debutant Sharwari is all over the place with her skimpily dressed histrionics. Pankaj Tripathi acts as a tough cop but loses steam mid way and is not even close to what his predecessor could get to. The film released in theatres on 19 Nov. ’21 and obviously had a bad run. Background Music has been scored by Julius Packiam and songs by Shankar Ehasan Loy trio. Cinematography by Gacvemic U Ary is the only praiseworthy thing in the film, at least.

Once in a while, I do end up watching such silly films, only to appreciate better things in life.
abhishek bachchan aditya chopra Amitabh Bachchan Bunty aur babli 2 Netflix rani mukherjee sequel