What intrigued me to watch this movie was the online on Netflix which mentions about a “shopping mall”. My love for retail… duh. Intrigued to watch a movie about shopping and retail, decided to watch and boy, I wasn’t disappointed. I have been seen eerie Malls right from 2004 onwards when I joined Bangalore Central Mall. On the first night of opening, the CEO summoned all of us and said - “We have a problem. The main door is not locking and we need 2-3 people to guard it.” A senior Sardar colleague, Mr. Rekhi raised his hand first. I was the second. We both sat outside the Mall all night and saw the sunrise. And mind you, we were not armed and had no weapons either though there were a few professional security guards present outside the mall. But still, to sit and guard an unmanned Mall, well, been there, done that. Security is a film set and shot inside a shopping mall where a former veteran who has just joined as a security staff takes full control in a rescue operation. Leadership, as always is assumed, I realised yet again, after watching the movie.

Eddie Deacon (Antonio Banderas) leads from the front and is all through the film, alm

ost in every frame and doesn’t disappoint one bit. Jamie (Katherine de la Rocha) is yet another shining child star in the film and is impressive too.

Eddie is a former Marine Corps Delta Captain and is unable to find a suitable job in his afterlife. He doesn’t share a great relationship with his daughter and wife though he loves them a lot. After pressing for an immediate placement with the Welfare Officer, he is posted at the Mall as a guard. He lands up late at night to meet his colleagues Vance, Mason and Ruby. As the Mall is closed for business for the day, the in-charge officer Vance takes Eddie around to show the various parts of the premises. The electric power supply to the Mall is disconnected to everyone’s surprise and they figure out something is amiss.

In the meanwhile, a US Marshal convoy is transporting a special witness in a heavily armoured convoy which is tactfully broken by heavily armed mercenaries. They manage to kill all the marshals but for the witness. 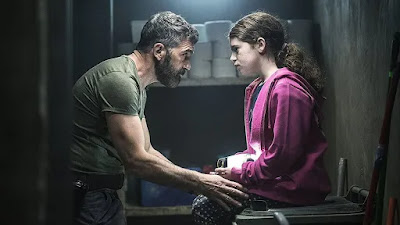 Couple minutes later, Charlie (Sir Ben Kingsley) arrives at the mall door to get back his daughter who has ran away after a duel with her dad. Just when the Security guards are about to hand over an unconscious Jamie, she runs back inside the Mall screaming annoyingly that he is there to apprehend and kill her. Charlie tries to make a deal with Eddie and the guards offering them a huge bounty on her head but the guards refuse the same, only to rescue the little girl. They lock themselves up inside the mall fully aware that the mercenaries will attack them from all directions and start preparations.

Each of them pick up a trait they know and try to build defence even as the mercenaries start entering the mall, from all directions while also disarming their cars. There is a sniper who keeps a tab on the highways that no other cars are entering the crime scene. What follows is a cat and mouse chase including a bike stunt by Eddie when the two sides kill almost all of them, save for Charlie, Eddie and Jamie. How Eddie manages to save Jamie for the night is how the movie ends.

Eddie reunites with his family eventually.

There is an upcoming tamil movie by the name Beast feat. Actor Vijay which seem to feature a similar Mall set-up done in Chennai city. Makes me wonder if it could reprise the original, of course with the desired masala quotient and songs. Would be interesting to see such a racy action + entertainment movie, akin to the actor’s Thuppakki which released a few years ago.

Security, the film is on Netflix.