It’s Christmas season and here is a film which revolves around the most celebrated festival in the world. And yeah, there is strong connect with the current Gen’s obsession to online dating and believing what they don’t see is also true. Getting “catfished” is often heard from the kids of the new millennium but this film takes it to an all new high. Finally, the movie makes us realise that we really like a person not because how they look or who they are – socially or physically, rather how they are and their true qualities and personal nature.

True love after all is hard. And “Love Hard” is a testimony to it. 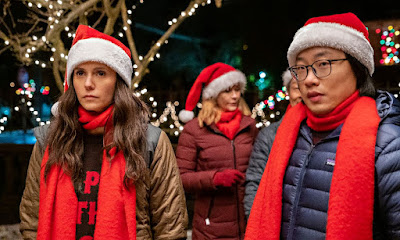 Natalie Bauer (Nina Dobrev) writes articles for a dating column for a publication in Los Angeles about her disastrous outings week after week. Her boss Lee (Matty Finochio) loves her escapades as they get great views and the audience is excited to read more and more of these. One day, she finds the profile of Josh Lin (Jimmy O. Yang) and they start chatting up. She’s intrigued by his charisma and decides to throw a surprise by landing up at his hometown Lake Placid, New York in a low-cost red-eye flight for Christmas. She eventually reaches the super-colourful and decorated house of Josh. Only to find that she was “catfished” – that the guy was actually hiding behind someone else’s photograph. Natalie seems to have liked the face of the guy more than his nature and is heartbroken. But she sees the actual guy (who was in the photo) at a pub downtown. Tag Abbott (Darren Barnet) is actually a former friend of Josh and is more charismatic in real, Natalie feels and falls for him instantly. Josh suggests that he would hook them both, in return to her acting as his girlfriend during the Christmas season as the extended family gets together and would really be happy to see him also have a girlfriend. Natalie reluctantly agrees but is more excited about the fact that she would eventually get over Tag. She becomes a part of the Lin family and wins their hearts.

Natalie does everything to impress Tag from rock climbing to lying that she likes Thoreau and bites a flesh of meat though she’s a vegetarian by choice. She goes on dates with him to know more about him, only to know that he is completely not how she would like him to be, neither what she felt of him when she was dating him (rather the other guy) online. While dropping her off after a dinner date, Tag says he has stopped celebrating Christmas because he believes the whole thing is a scam, after all. Natalie feels crushed and realises that he is not the guy whom she yearned for so much and is left perplexed. 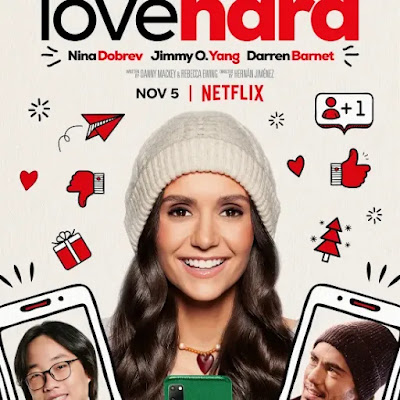 Meanwhile, Josh’s younger brother Owen and his fiancee are in town for Christmas. When they announce that they’re about to become parents, Josh proposes to Natalie impromptu in front of everyone. He tells Natalie that everything is a lie, after all and that they could break up after the season is over so the family would take it up as real. Current state of affairs of the current generation. Sigh. Josh’s grandma offers her wedding ring so he could place it in Natalie’s finger. All is well.

However, Josh’s enthusiastic mother places a congratulatory advertisement in the local tabloid. Meanwhile, Tag is about to inform his parents that he has fallen for a girl. That’s when Josh’s family hosts a surprise Engagement Party. Hell breaks loose. Natalie announces that she was acting a whole lie to the Lin family, which disappoints everyone incl. Tag. The whole evening ends abruptly and Natalie leaves the house of the Lin’s on the eve of Christmas. But she is intrigued with the fact that the person whom she chatted, laughed with and loved being around online was indeed Josh and not Tag, with whom she had no comparable qualities at all. Meanwhile, Josh’s father discovers his love for candle-making and encourages him to follow his passion. Natalie lands up at the Lin’s only to discover her true love for Josh.

A happy Christmas and a happier ending for all, incl. the audience.